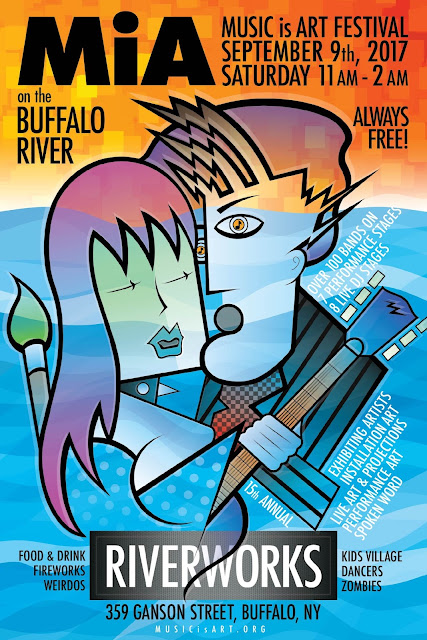 All inspired moving entities seek to refine through the years and for the Music Is Art Festival year 15 was without a doubt the best year ever! It was massive on epic proportions, like a sister to Burning Man. 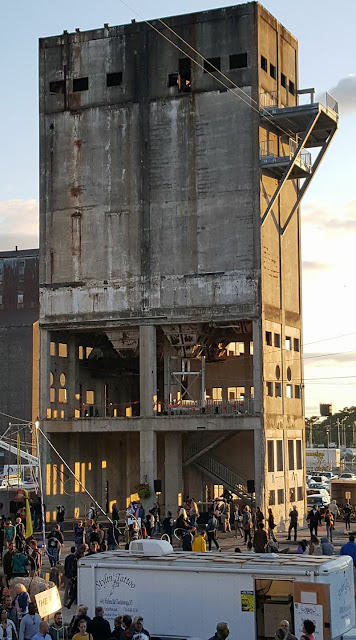 Photo courtesy of Z Mann Zilla
The festival may have found it's new home. Riverworks is a sprawling cement jungle-like mansion in the mysterious ruins at the heart of Buffalo, next to the old canal. The space alone holds thousands of stories from our ancestors.
I found myself getting lost in a musical maze. Every corner I turned there was different action going on. To some it may have seemed like total chaos and distracting. But I found there was a peaceful harmony between all the diversity and an ability for the mind to focus on one thing with so much going on all around. Sometimes we need a distraction to distract our minds from the difficult things in life we can't control and tend to over think, like sick loved ones or death. That's the power of music, art and dance. It heals our broken souls so we can revive and be the best versions of ourselves. 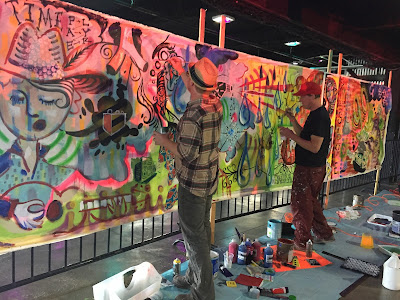 It was impossible to see it all, but with the help of hashtags #MiAFest2017 and social media I've been able to piece my  amazing festival experience together for you.
Take a look at this map and imagine just how HUGE the festival is! 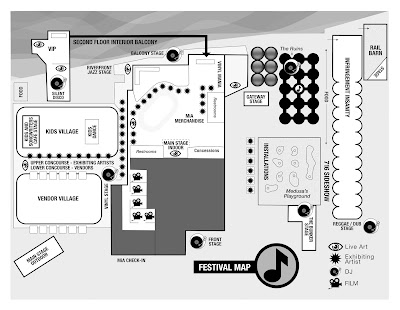 If you're not familiar with MiA here's the long story short: Robby Takac from the goo goo dolls created the Music is Art foundation in 2003. The foundation does a lot of assisting and inspiring throughout the year for schools and the youth. Plus every year Buffalo is blessed with a free all ages HUGE all day festival. Although this year it turned into an all weekend event with a pre-party on Friday and hangover party on Sunday, so who knows what the future holds for MiA. The festival has over 100 bands on 6 stages, 6 DJ stages, 2 dance stages, live artists, installation artists, photographers, and spoken word. It's a massive conglomeration of artistic expression. 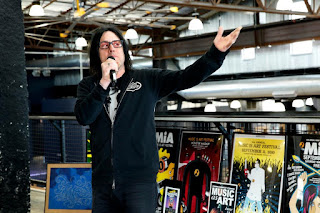 Robby Takac
Some things that stood out to me was the ginormous main stage area surrounded by the second floor indoor balcony wrapping the entire building where gymnast had silk ropes to do aerial dancing and a giant main screen video showing snippets all day of festival action.

If you needed a reprieve the second floor was the place to go where artists were painting live right next to a silent disco. Imagine tons of people vibing to the DJ and dancing together with headphones on, not making a peep. 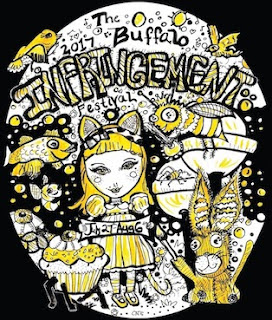 The infringement festival celebrated it's musical insanities for one more day in the silos of the ruins. A great way to end its summer festivities following a 2 week long festival in July.
A musical petting zoo and not one, but two bounce houses in the kidz village. A stage on a boat, yes a boat in the water, at the dock of river works! Even a horror-movie marathon. This festival had every opportunity you can think of for all types of music and art lovers.
At the end of the night a man appeared in a space suit and started playing a burning wooden grand piano. He played until the last possible second then escaped before being engulfed by the fire. A piano in flames and a spacesuit!!! It doesn't get much cooler than that. Makes me want my MTV. 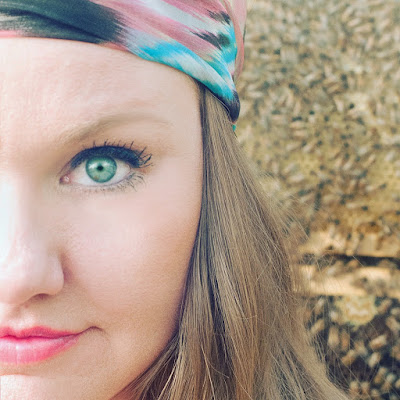 My Musical Quest at MiA
I was lucky enough to be part of 3 different musical sets. 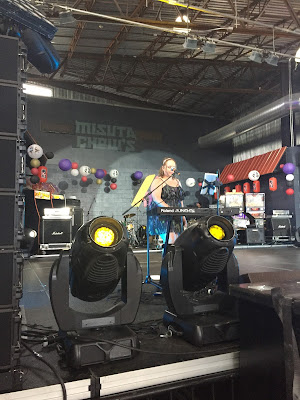 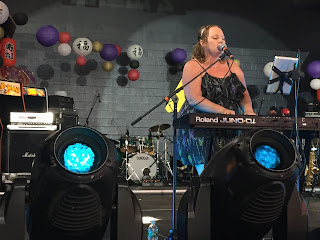 Katie Ann performing in #MiAfest2017
I was the first musical act to open up the festival on the main stage. It was truly an honor. I performed all original music from my latest album Driven  with my juno keys and new TC Helicon foot pedal called voicelive 3 extreme. MC ZiLL joined me on stage to perform our honeymoon song Positano and a new favorite called Black & Blues. 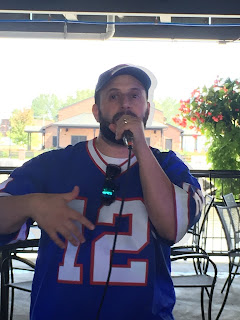 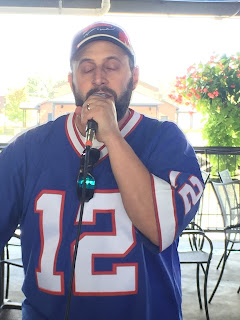 My incredibly talented husband, known for his song We're Teaching, lyrically slayed his set at the gateway stage.  He's getting ready to drop a new project called "say no to the con-con." Once again he'll be releasing an activist musical outreach project. This time reflecting upon the constitutional convention that is affecting NY voters on November 7th. 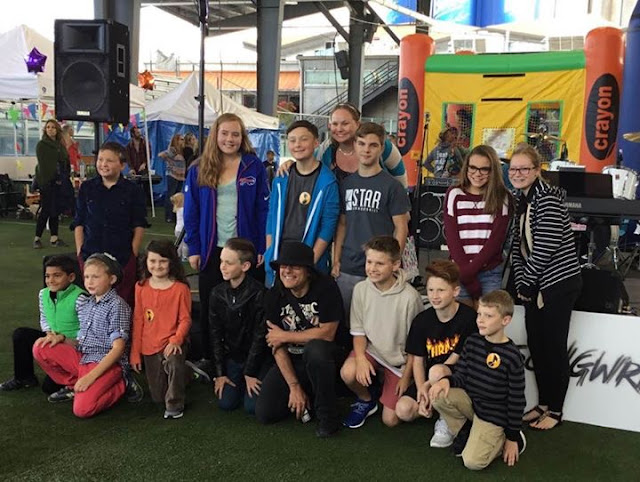 Students of Katie Ann posing with Robby Takac during their performance at #MiAFest2017
In the kidz village my class performed their final summer concert. I created a summer program to benefit Music is Art for my piano and vocal students. The four-part project consisted of three live performances and recording a class CD all to raise funds for MiA. By the end of the experience the students gained the confidence it takes to perform in the public. I encouraged my students to tap into the rockstar within and embrace every given opportunity to perform.
Part I
Students performed at canalside in a recital hosted by Future Sounds of Buffalo at the Dish.
Check out this awesome article in Buffalo Rising about the event! 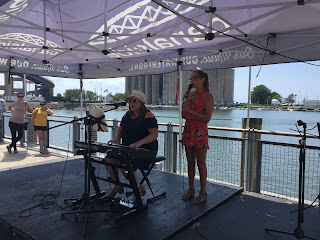 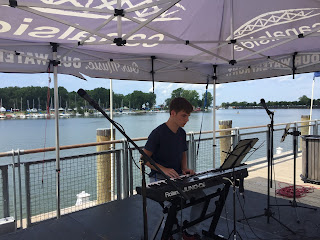 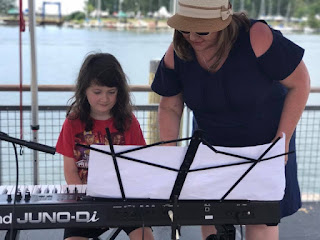 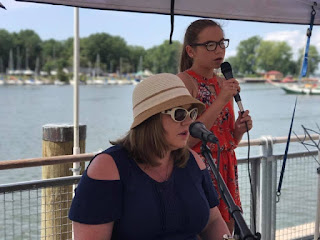 Part II
Students recorded at Robby Takac's recording studio, GCR Audio. Thanks to the recording engineer, Justin Rose, we were able to create a class CD. 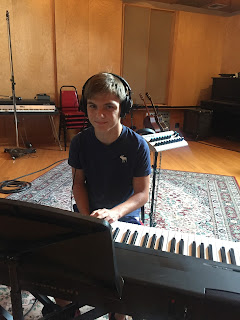 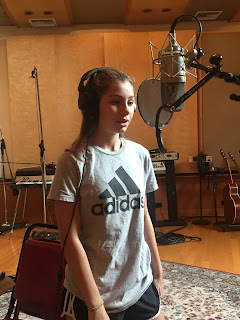 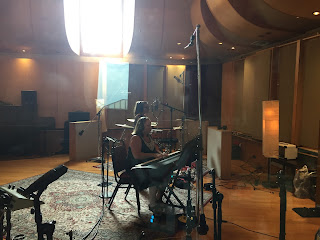 Part III
The class released the CD at our recital fundraiser to benefit MiA at Ashkers on Elmwood. 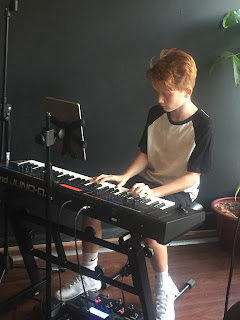 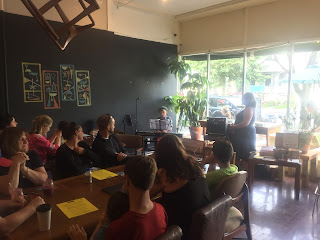 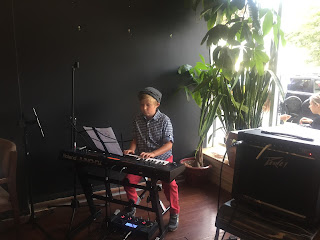 Part IV
The class performed at the MiA festival where they got to meet Robby and personally hand him our class donation. We ended up raising $325!!! 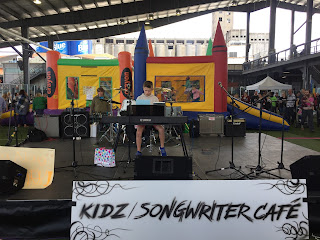 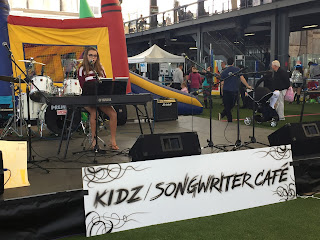 Email musicbykatieann@gmail.com to learn more about piano and vocals lessons with Katie Ann.
Thank you Music Is Art for an incredible experience!